This forum is for discussing and showing off anything that relates to fixed blade knives.
Post Reply
90 posts

I intend to use it. It sharpened up nicely.

The gentlemen over britishblades.com thought it to be no newer than the early fifties. They seem to think the sheath is pressed paper rather than leather, which they said was typical for post war Finland.

It is a great feeling little knife and I see no reason whey it wouldn't do about anything you could ask from a knife of that size.
Member of The West Texas Chapter Of Gun Ownin', Pickup Truck Drivin', Jingoistic, Right Wing, History Changin', Huge Carbon Footprint Leavin' Conspirators.
Top

Pressed paper.. Aha!
I was wondering about that sheath and its pale look, but thought it to be a photographic effect... I've heard about those sheaths, but never handled one of them.
Put a nice edge on that knife and I think you will find it to be a great user!
Just be a little cautious if the handle gets wet and slippery and you are not used to fixed blades without some kind of guard...

The handle getting slick HAS crossed my mind.

I can imagine it would NOT be fun to slide your fingers across that blade..

I've got another puuko that I need to get photographed and posted as well. Same basic style, just later and different maker.

And I've got a weee TINY one as well.

He-he... I remember discussing knife designs once with a very patriotic Nordic knife enthusiast. "Americans and Germans are pussies", he said with contempt in his voice, "guards on knives are for children, not grown-ups!"
That was his opinion, not mine, but traditional Nordic knives seldom have guards. I'm used to that and I don't really miss them. Especially a double guard limits the ways you can hold your knife and I find that at least a big guard will often get in the way when using the knife.
I'm no knife fighter and I don't do a lot of stabbing..!

I will try to post some pics of an older puukko soon.
Knivlaus mann er livlaus mann.

Here's that other puukko I was talking about. I can't decipher the maker. 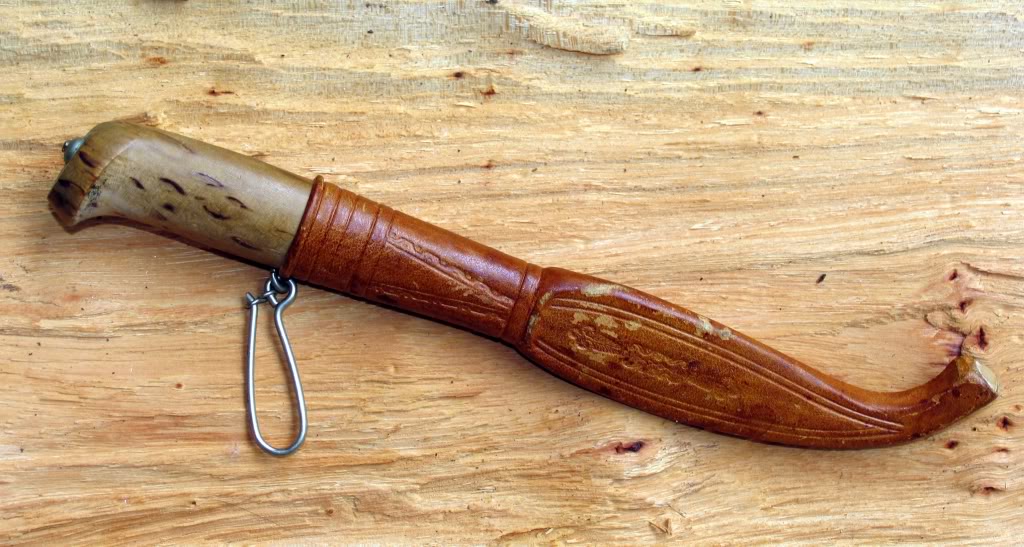 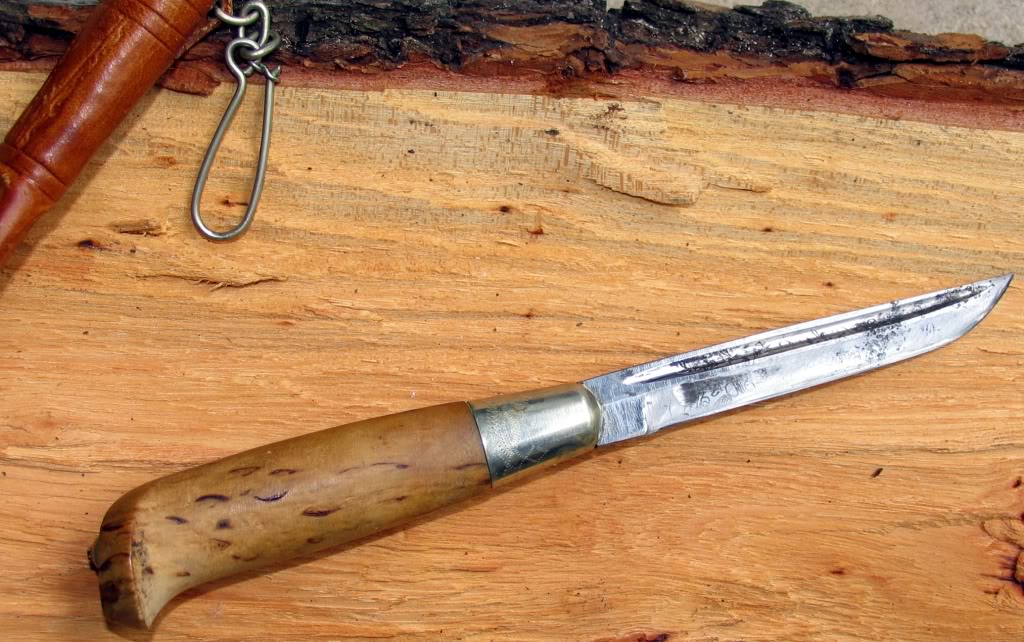 This one came to me REALLY sharp.

Interesting puukko!
I don't know much about these, but I believe your knife was made in Kauhava, sort of a puukko making capital in Finland, and once the home of several makers of traditional puukkos. Puukkos are still being made there.
I think those metal belt attachments were used buy a few makers only, and not for that many years ...
Knivlaus mann er livlaus mann.

One of the things that really fascinates me about that knife is the sheath. It seems to have a vacuum fit. you can slip that knife into it as easy as you can and it still will not fall out if you turn it upside down.

Whoever made it certainly knew their stuff.

A well-fitted leather sheath is considered to be a very important part of the deal when you purchase a fixed blade knife in either of the Nordic countries. The sheath is expected to hold the knife securely in place when you spend all day outside and hike through rough terrain, and at the same time we expect the sheath to make the knife easily drawn when needed. And then, of course, it should be good-looking!

Hi froggyedge, this knife was made in Finland as so stated on sheath. I wanted to share it in Scandinavian fixed blades.
I enjoyed the history you offered in July 14,08. My grandmothers family is from Norway. Their name is Ellertsen. I'm very proud of that heritage. Thank you.

Was that the history of Saint Olav and The Norwegian Lion?
If you are interested, you can read more about this most famous of the Norwegian kings here:
http://www.pilegrim.info/en/index.aspx?id=353809

The Nidaros Cathedral is the largest and most important church in Norway.

Here's another puukko. Quite similar to the one I posted pics of a week or two ago. Althought this one has a 41/2" blade and has seen a lot of use.

I do not know many details about the history of this particular knife, but it has belonged to an old school teacher who's great passion in life was hiking in the Norwegian mountains. I'm not sure if he was the first owner. The blade has been sharpened many times and the knife has probably seen countless days and many nigths in the mountains. His son eventually got dad's old knife and kept using it for some years, but he was not an avid outdoorsman and did not take as good care of the knife as his father had done. The tip got broken off and he probably never sharpened the knife.

I brought the knife on a trip in the woods recently and took these pics. The knife has not seen fresh air for some years now and I felt it was about time...
The edge is very dull and I have not sharpened it, even though it was tempting. This knife has served for many years and I consider it retired now.
The sheath is decorated with reindeer hide and leather and has a depiction of a reindeer head with antlers.

. The sheath is still holding the knife securely in place, also when held upside down.

. It has the long belt loop typical for many Finnish and Sami knives.

One of those old knives that has served for years and that you really wished could talk...
Knivlaus mann er livlaus mann.

Owd Wullie wrote:Here's that other puukko I was talking about. I can't decipher the maker.

This one came to me REALLY sharp.

Looks like it was made by L & K (Luomanen & Kump.) and yes, they were a Kuahava commercial maker. Kuahava had over 150 Puukko makers in it's prime. The metal hangers were generally used on sheaths made before the 1950's, but some were made later.
Top

One more puukko of mine coming up..!

This particular knife was given to me by a former employer many years ago. I like the knife, but as I may have mentioned earlier in this thread, I'm no big fan of the double guard. We don't see a lot of those on Nordic knives and I prefer it that way.
I think the guard sort of looks good on this model and although I've been tempted to remove it, I have not done so.
The main use of this knife for me has been as a backup or extra knife. That means that I've carried it in my backpack for many trips through the years without the knife actually seeing that much use.

This puukko is made by J. Marttiini from Rovaniemi, a manufacturer who has been making knives since the Twenties.

I love any sheath with rivets and even more with the tip wraped in steel.
A sign In a Chinese Pet Store: 'Buy one dog, get one flea.'
Top
Post Reply
90 posts