A place to discuss military related knives and tools. Conversation relating to objects of war and peace from all eras welcome.
Post Reply
189 posts

The basic army-issue clasp knife with marline spike and tin opener in the first part of the 1900s was the pattern 6353/1905. It first appeared in 1905 and remained basically the same until the start of WWII. The original spec comprised of stag scales. The first knife in pic 1 is an example made by Hunter Sheffield and marked with the Broad Arrow and I for use by troops in India.

Just before WWI, in 1913, the specs were updated. The scales were changed from stag to chequered horn. The three attachments to be made of the best 'cast steel'. The overall length closed is 4 7/8 inches with the spear blade 3 1/2 inches from kick to point. The shackle made from number 11 guage copper wire. These were the basic GI folder in WWI. Two typical examples seen in pic 1 made by Jos Rodgers & Sons and Frank Mills. Both marked with W arrow D; the War Department mark. 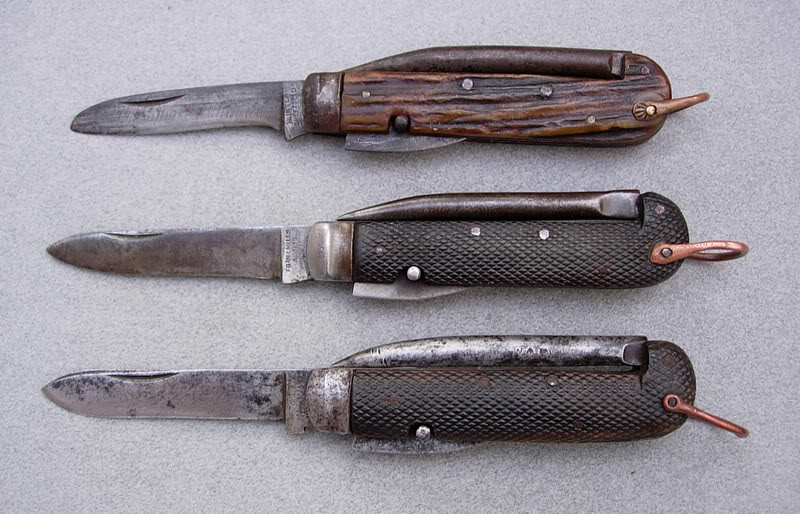 Next are three examples of circa WW1 knives for use by Canadian Forces. The first is the typical British 6353 knife made by Wostenholm, but marked on the spike with the Canadian broad arrow inside a C. The middle knife is the same basic spec made by Thomas Turner & Co but with metal scales. The handle is marked with M & D for Militia and Defense 1915. The last knife in the photo was made for the Canadian forces by Schatt & Morgan of Titusville PA. Beautiful bone scales on the this one and a nail nick on the can opener is different from the Sheffield-made knives. 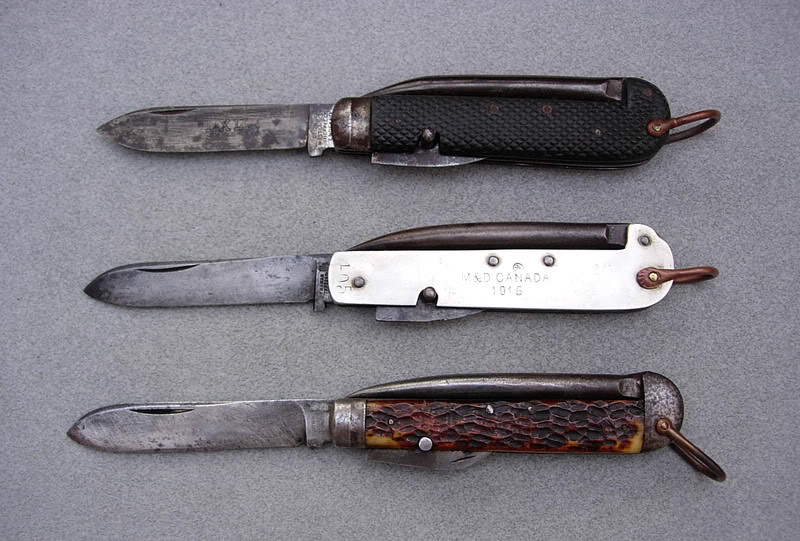 While not an official issue knife, the jack knives with tin opener and bone scales were included in gift boxes sent to the troops during WWI. This example was made by Wade and Butcher. 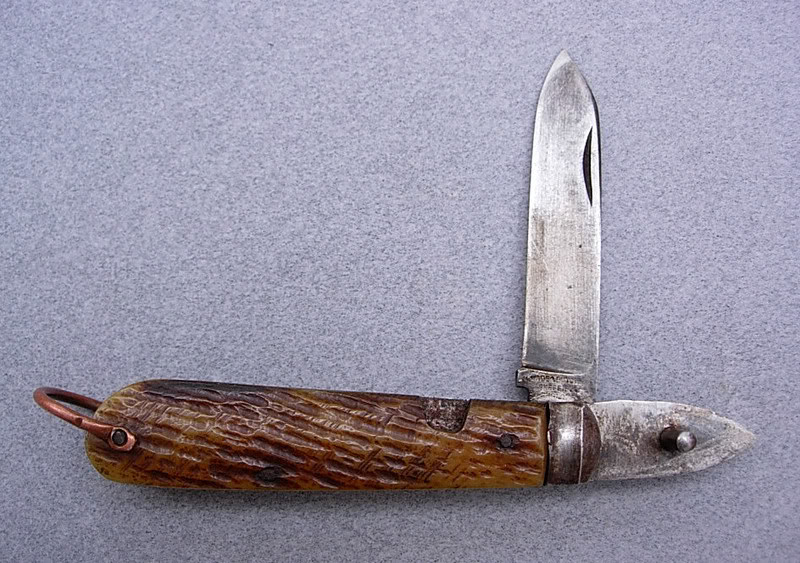 Please feel free to add knives, cooments or questions. Thanks for looking.

Steve can you shoot me an email? I had your email but lost it.

It's been a while since I posted here, not had anything to contribute but I have been dropping by now and again for a look-see!

I have some family momentos from WW1 which ties in with this thread and which will give a flavour of the time, so may I introduce Archie?

This is my grandad, he would have been 18 or 19 years old at the time this was taken in 1914 and was a reservist in the teritorial army. He was among the first troops to be sent fron England to Belgium to fight in WW1

He sent this post card to grandma. She still had his army issue knife when I was a kid and used the can opener in her kitchen.

As you can see, Archie was a man of few words!

The first Christmas of the war, and the troops received a card from the princess Mary and gift boxes, I think this was when the "gift" knives were distributed.

This is the message in the Christmas card. He was to serve for three years untill 1917 when he was badly wounded and returned to England on a hospital ship. he survived into his 60's and I have fond memories of him from when I was a small child. 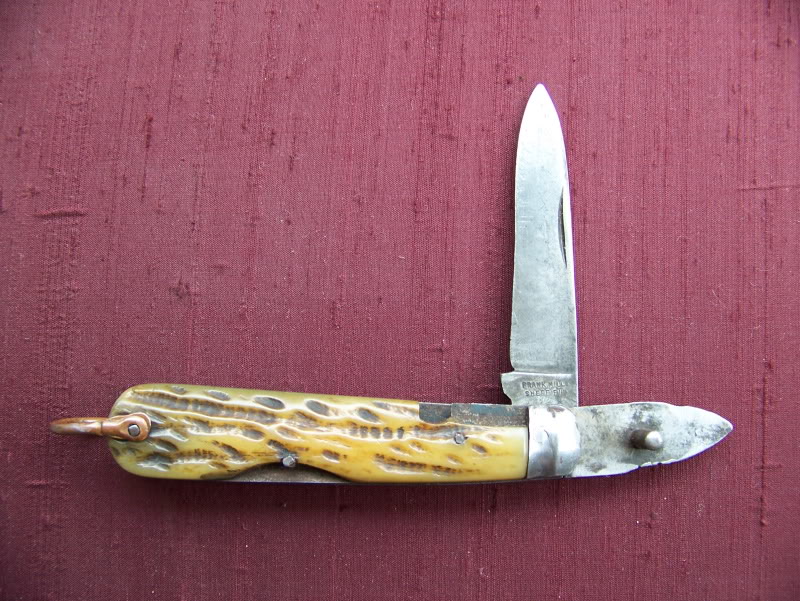 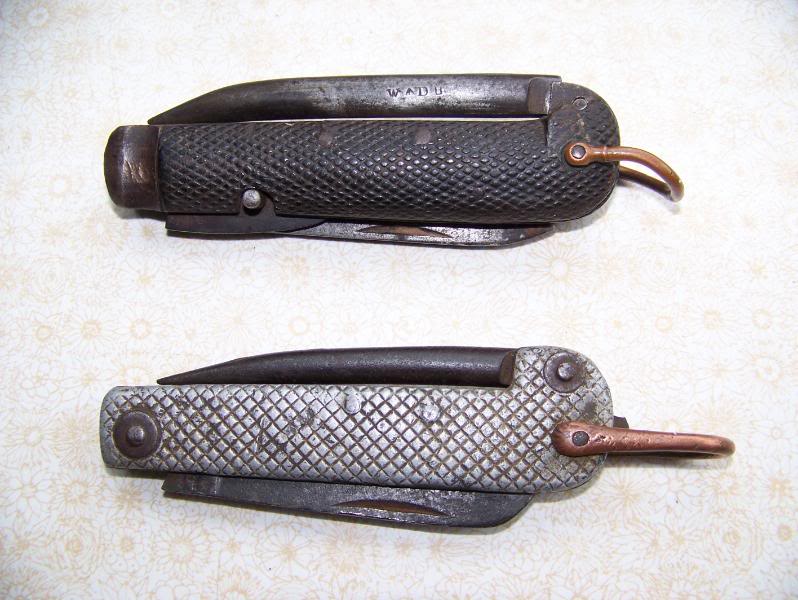 Two by Rodgers, army and navy issue, the army pattern still being used untill the end of the 30's. 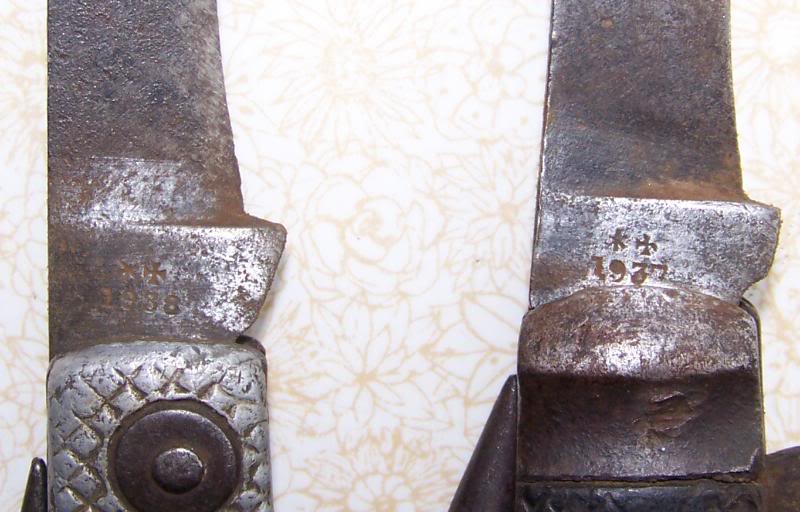 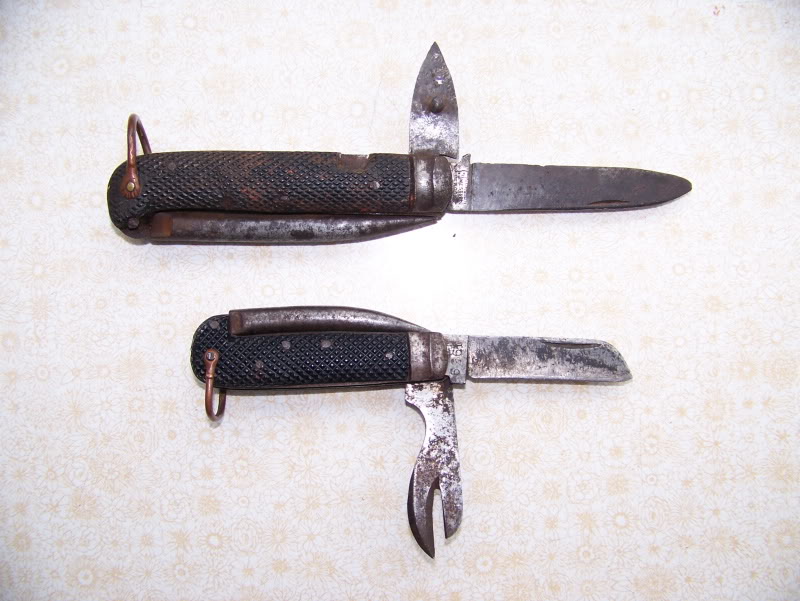 Thank-you very much zorro for sharing that aspect of your family history. It give the knives some valuable historical context. Thanks also for showing the change in pattern that took place around the time of the start of WWII. I changed the title of the thread so we can carry on from there.

By the end of 1939, the standard British army issue clasp knife was now the smaller patern, with a modified can opener 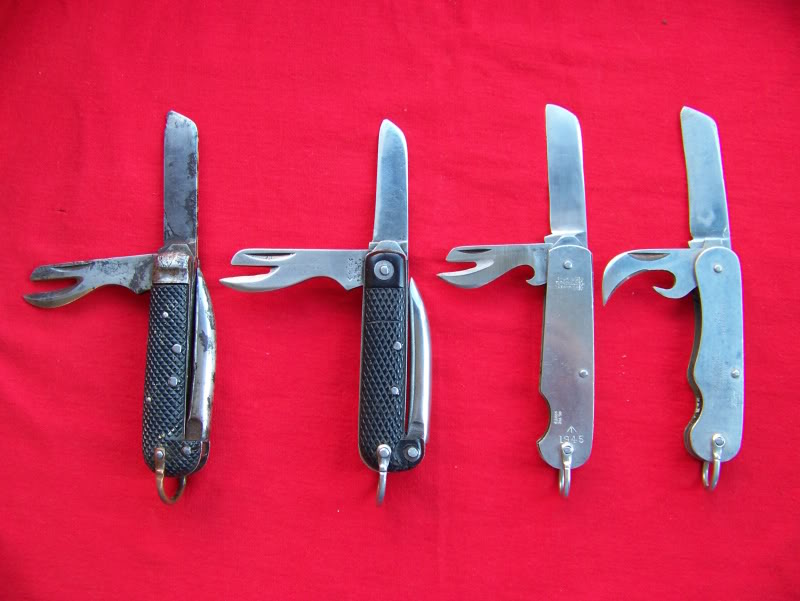 From the left, 1939 Richards, 1943 W&S Butcher, 1945 "Burma" knife by Thomas Turner, and a post war 1953 J H Thompson, which evolved into the modern NATO knife still used today. There were many variations on these standard themes, no marlin spike, no shackle, different scale materials, but these are the most common I am aware of. 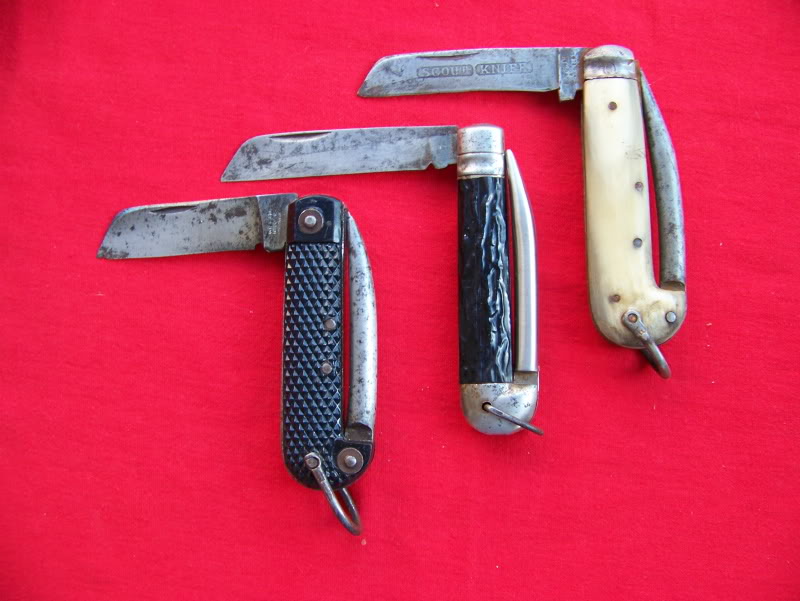 From the left again, William Rodgers, Richards and a C Johnson & co with buffalo scales. 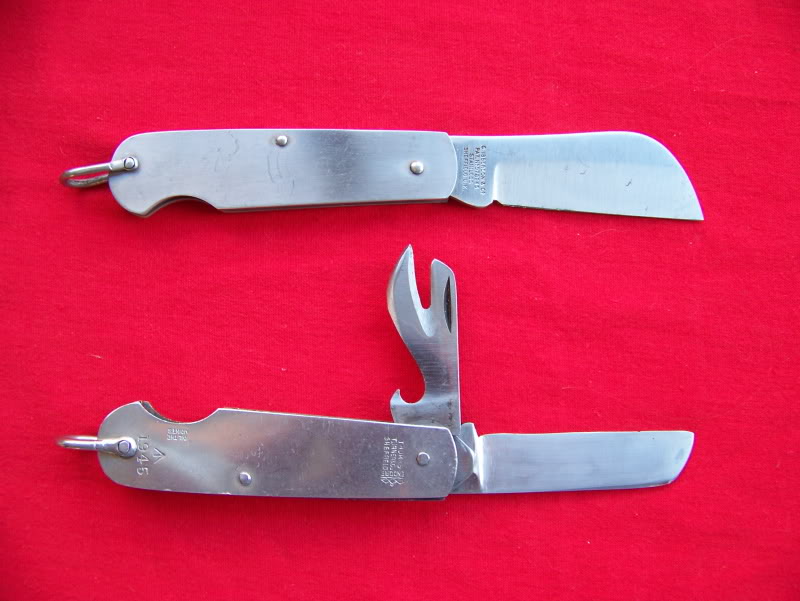 This G Ibberson (top) looks like it was made using burma side plates and springs, no WD mark so probably also civilian. 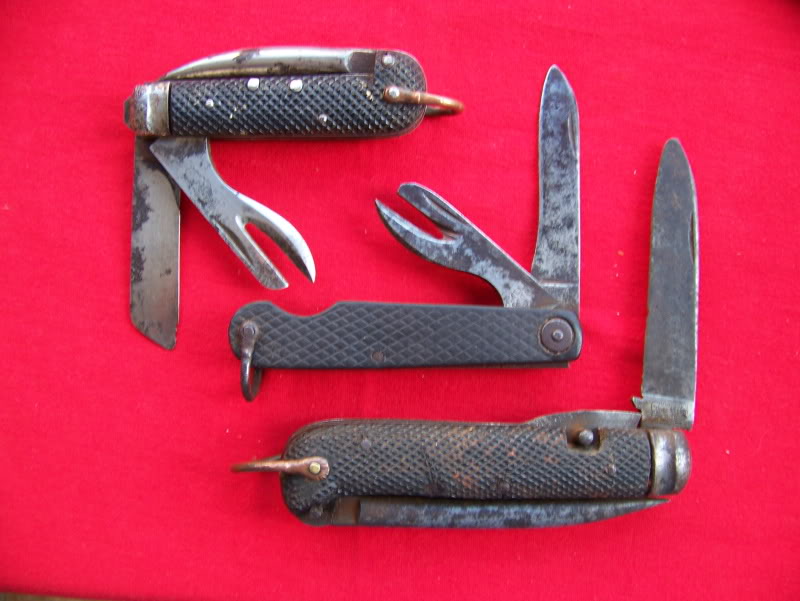 Another unusual one, this J Allen (center) has the early longer spear point blade with the later tin opener design, again no WD mark. 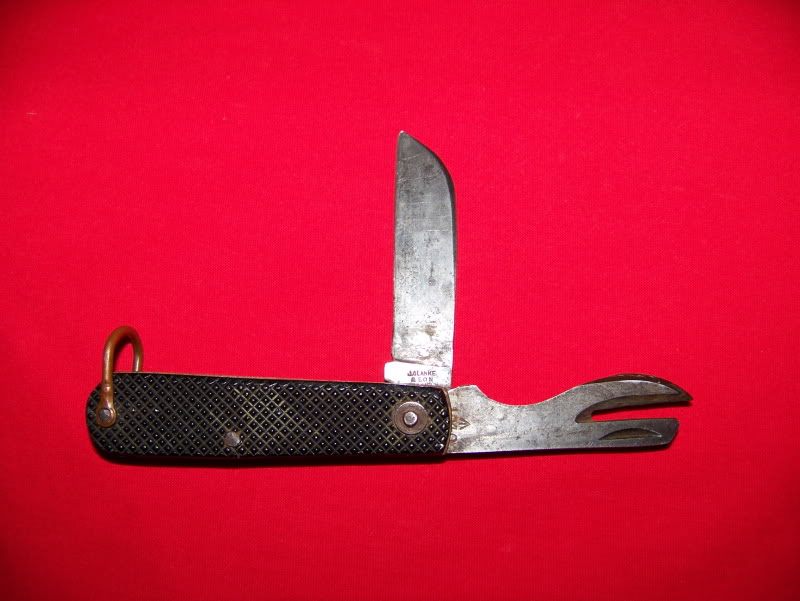 This is a 1940 J Clarke&Son, no marlin spike and flat scales, very little wear so may well have been issued to a desk jockey! 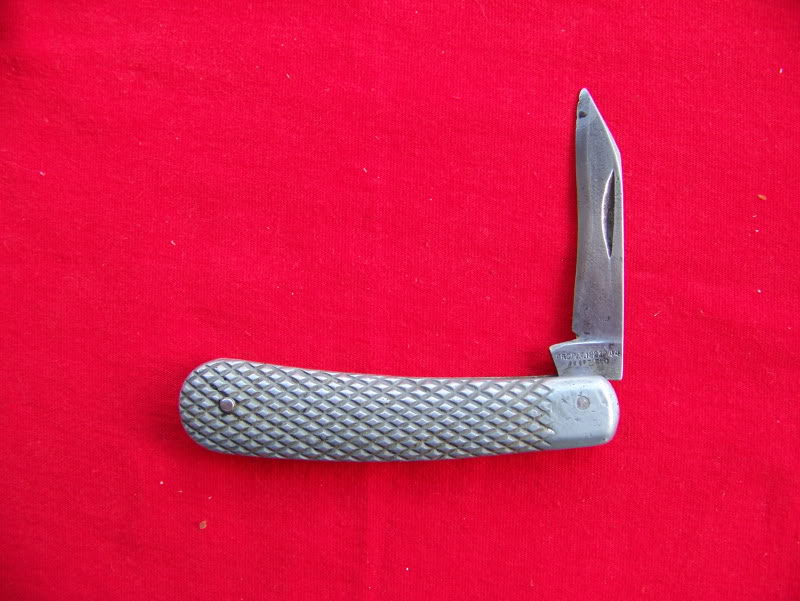 Finally, here is one I cannot get to the bottom of, it may not even be military, tang stamp PROPAT.18230/44 Sheffield, no makers mark. I suspect the mark to mean provisional patent, 18230, date 1944, which could make it a prototype far east Army or possibly Navy knife which was not adopted.

As usual with my posts, please feel free to correct or add anything, all wellcome, thanks for looking.

wow, how did i miss this thread?
fantastic collection zorro
the frank mills had me staring at the screen.

This is said to be "L.C.SIMMONS KEEN KUTTER ST.LOUIS USA". It looks similar to the Canadian issue knife, I haven't received it yet so I can give any more information on the composition of the handle. Were these made by Keen Kutter and could it be military issue?