This forum is for the straight razor collectors among us. Please stop by and share your knowledge, show off your razors, ask questions, or just look around.
Post Reply
29 posts

Finally got around to getting these ready to run.

Joseph Wostenholm, not to be confused with his highness George of I*XL fame. The two had a feud over name rights for years and ol George finally won out,
This one was more than likely a military razor. Dog only knows what outfit. It's about a 5/8. Interesting to hone too. Even more interesting to shave with that big "smile" the blade has. Surprisingly, it is a wonderful shaver. The 80 West St address dates it 1841-1845. 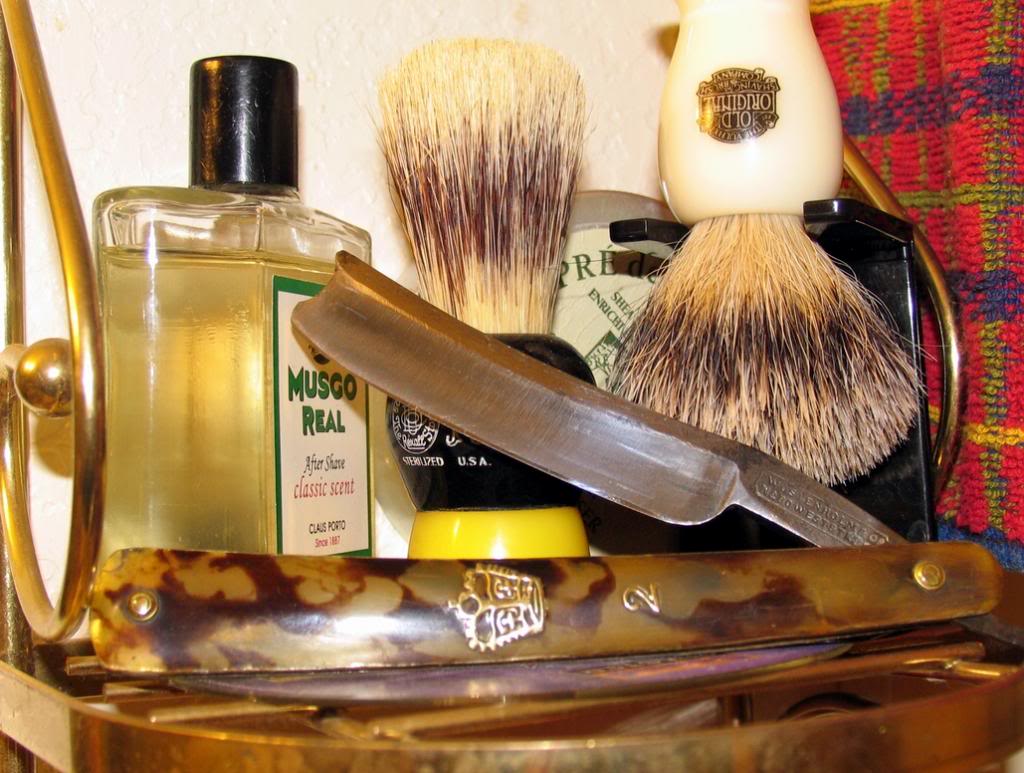 Dyed horn scales. Whoever dyed 'em was an artist.

This one is a 7/8 W&B "Chinese" razor. The characters on the blade are not real Chinese characters but they look neat. Supposedly these were popular around the time of the Gold Rush era. I think it's a bit later than that and more like 1860's to 1880's.
It's a healthy hand full of English steel either way. Been up and down a hone a few million times too from the amount of wear and the width of the bevel. Against my better judgement I honed it without putting a layer of tape or two on the spine. It shaves OK, but not as good as I'd hoped. I'll tape it up and recut the bevel on it and it should come around then. 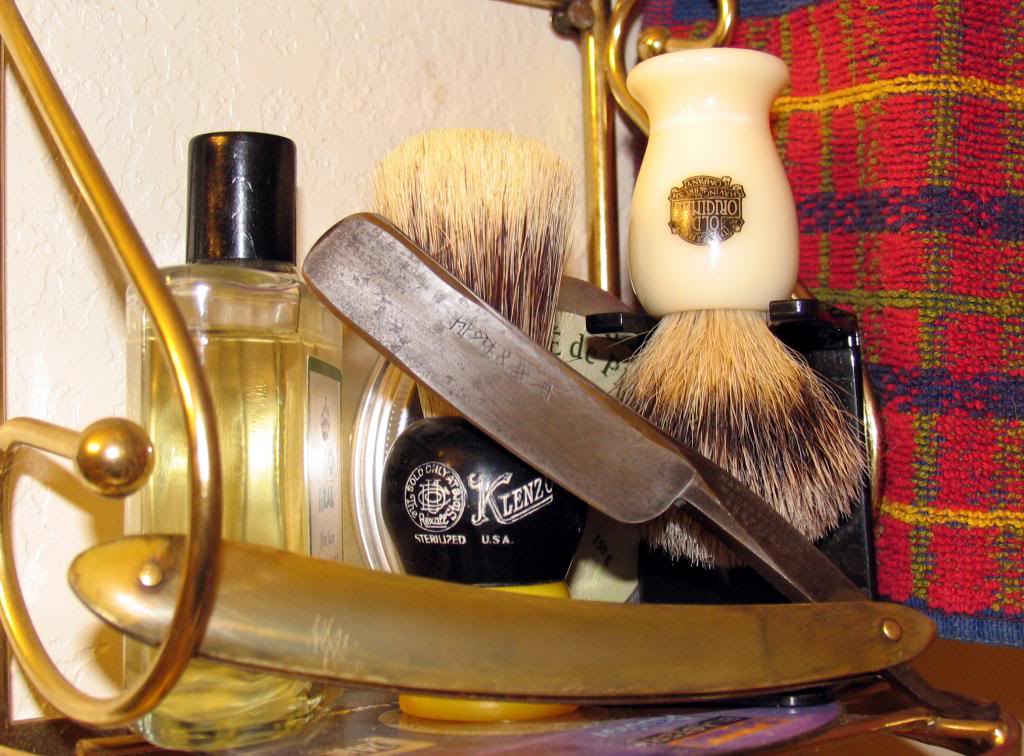 Very cool Willie! I can imagine trying to hone that smiley!

It isn't that bad. You start at the heel and drag it toward you as you rotate the point around towards you. The fun part is rocking the blade as you pull/push it across the stone as the edge doesn't lay completely flat all the way across. It is way different than a newish hollow ground with a straight edge.

Here's another smiling razor, I just got honed up. It's a little 5/8 W&B with bone scales.

Took it for a shave last night. Shaves great, BUT, it's TINY compared to what I'm used to. That old Wostenholm is about the same width, but has considerably more weight.

Smiling razors are nice to shave with too.

Ought to find ya one and give it a whirl.

Hard to know for sure. Maybe climate or whatever the razors were stored in.

Sure glad the beetles didn't get 'em like they have some others that I've got and more that I've seen. Those little bastards can tear up some stuff.
Member of The West Texas Chapter Of Gun Ownin', Pickup Truck Drivin', Jingoistic, Right Wing, History Changin', Huge Carbon Footprint Leavin' Conspirators.
Top

Thought about you the other day when I was in Midway Arkansas at a antique store....they had several razors in their display case. They usually have some every time I'm in there....
God Bless!

We'll be up there the first week of June. I'll come over and visit for a bit.
Member of The West Texas Chapter Of Gun Ownin', Pickup Truck Drivin', Jingoistic, Right Wing, History Changin', Huge Carbon Footprint Leavin' Conspirators.
Top

Here's an ol' timer I got in a feebay deal. It came with a vintage strop I bought and the photos were better of the strop. Fair price for a horsehide strop so the razor is sorta a "gimmie". Whatcha think Willie?

Weighs in at an even three ounces and is a little over an inch wide. Former owner listed it as having wood scales, but they are horn, of course, complete with bug bites. Lead spacer and brass rivets complete the package. I'm gonna go soak it in mineral oil and then sharpen him up an' give 'im a spin around my chin!

The strop is my old one, the new one is better.
Barry

Yeah, I've seen 'em go for some big money... that's why I never owned one.

Horsehide strops are the berries!!

Once you get that beast honed up, you'll LOVE shaving with that thing. IF you don't, send it my way and I'll send you 6 ounces of newer smaller razors. 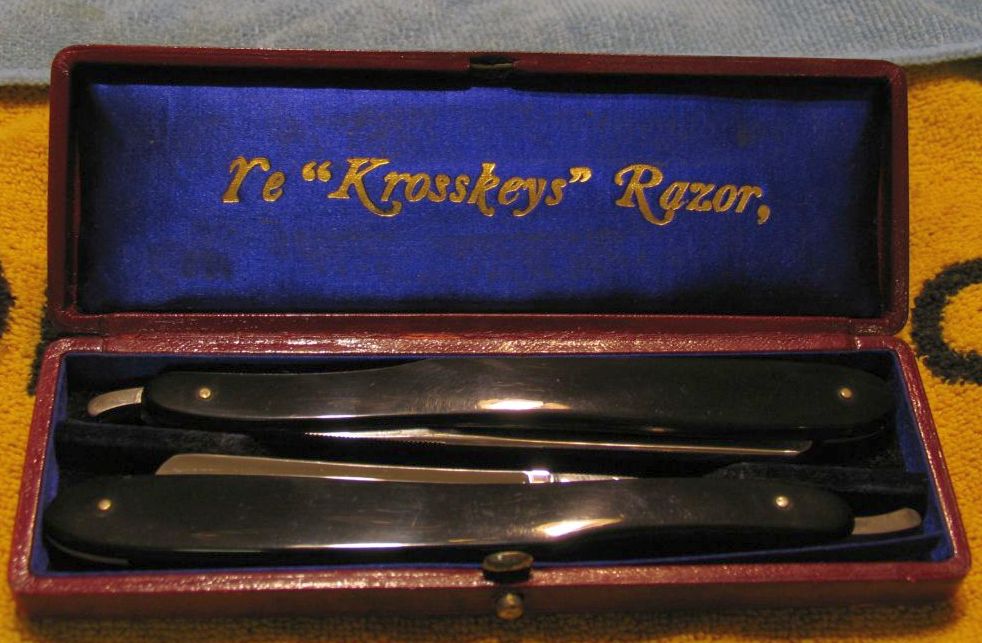 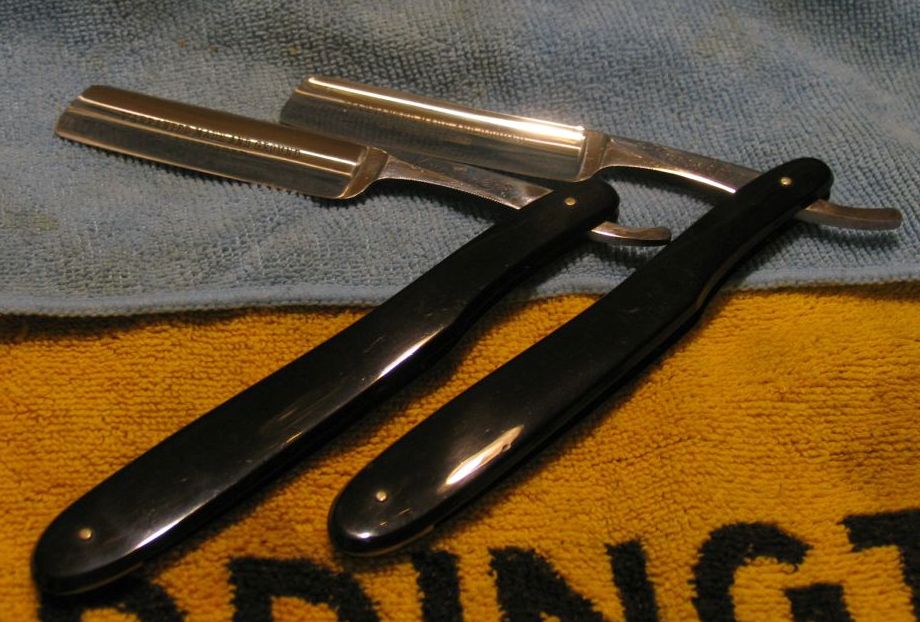 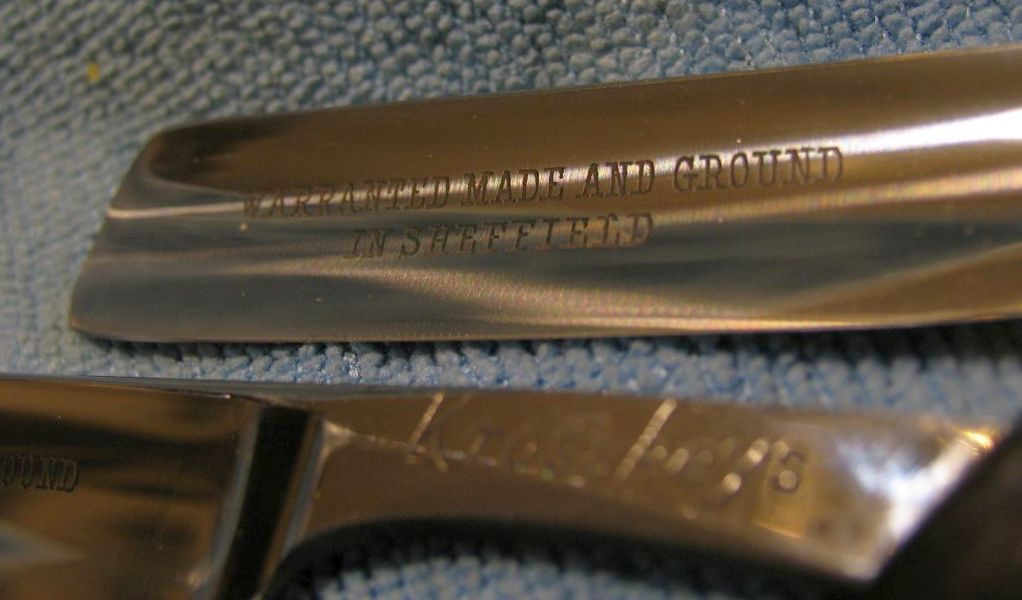 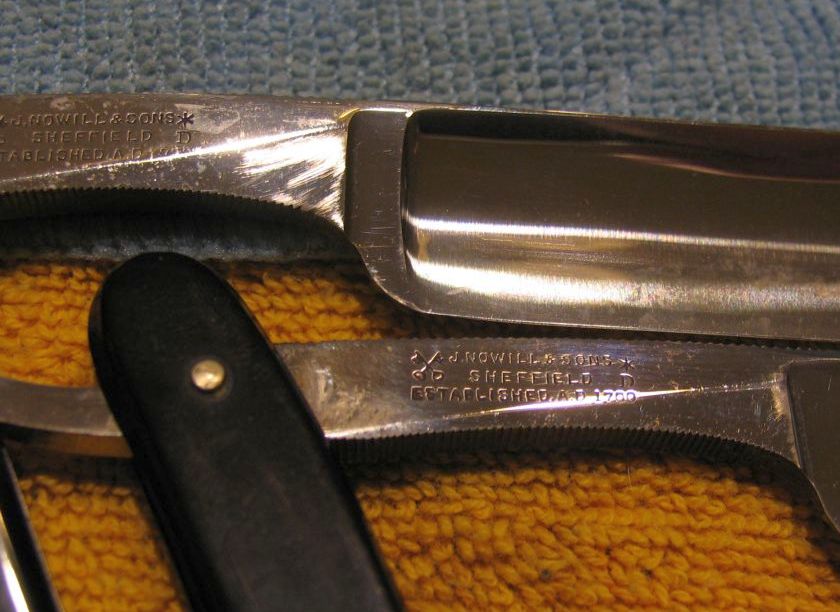 Here's one that is only an inch. Pretty sure it's made by W&B but was imported by KING. 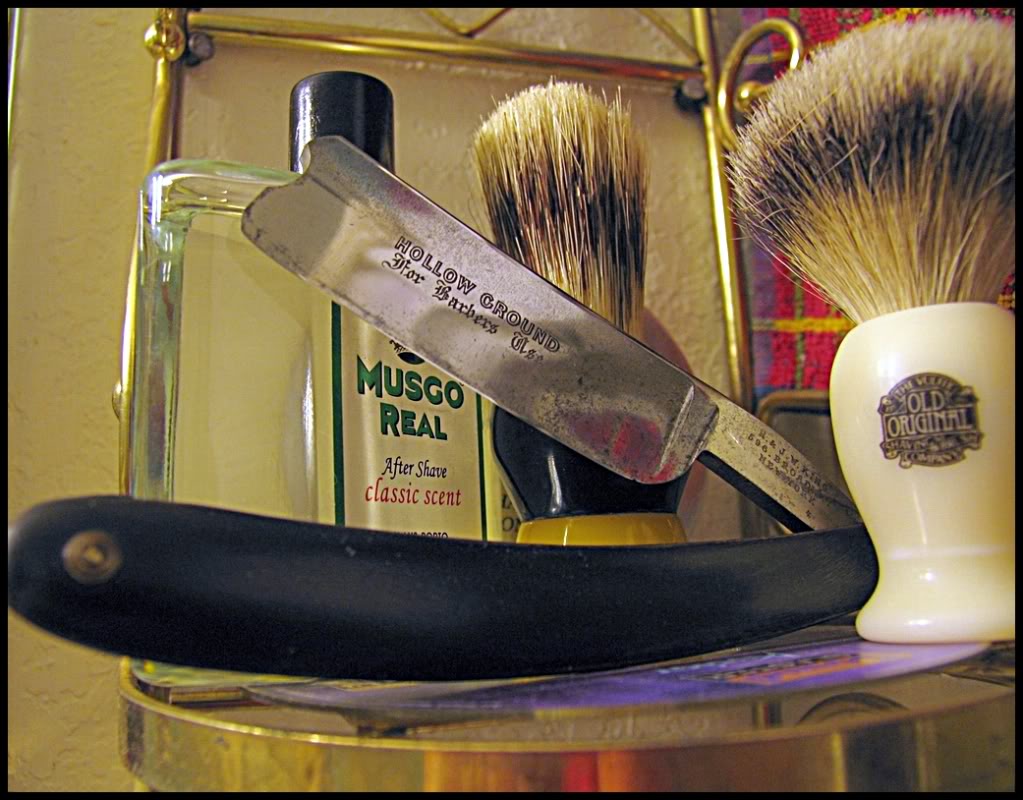 Didn't get a lot of use. Honed up easy and shaves wonderfully.

Was just noticing on yours that the hone wear is pretty noticeable. A layer of electricians tape along the spine will make it easier to hone up. You don't ahve to cut quite so much metal on the bevel that way. I've had some that had so much wear that I put four layers of tape on 'em to get the bevel down to a decent size instead of half an inch wide like that old W&B "Chinese" razor posted above that I didn't use any tape on.
Member of The West Texas Chapter Of Gun Ownin', Pickup Truck Drivin', Jingoistic, Right Wing, History Changin', Huge Carbon Footprint Leavin' Conspirators.
Top

The King is gorgeous!!! Super razor there too!

Well, I cleaned and honed the ol' girl up last nite and shaved with it this mornin'! It is a very nice razor once you get a feel for the heft of the thing. Had to put it down once to rest my arm, but it did a commendable job. I 'spose the weight isn't a bad thing... kinda warms up the elbow for afternoon activities.

All kidding aside, the bevel wasn't too long at all so no tape requied for the hone work; it actually took less than a hour. Looks like the blade slipped out of someone's grip and slammed into the horn scales taking a chip out of one side, but otherwise the scales are in good shape as are the original rivets. I'm curious of the date of manufacture; would it be pre 1880?

Here it is after clean-up:

Good deal on the hone and the shave. They are a hefty handful but I LOVE the heavy bastards myself. That edge will probably mellow and get really smooth after 4 or 5 stroppings. Hit it about 10 or 15 licks on the linen and then 20 or so on the horse hide. After the edge settles down, I usually run mine about 5 (up and back) on linen and then 15 or 20 on the horse hide. Hold that strop pretty taught when you use it. Another thing they recommend is to oil the strop with the oil off your hand. I usually rub my forehead and then rub that into the strop. Slicks it right up. Horse hide strops don't have as "draw" (drag on the blade) as cow hide. That Illinois is a good one.

Scale damage like that is typical of those big ones. It does appear to to have never been rescaled as it is wearing the typical W&B pins and collars. Those scales will shine again if you hit 'em with some 1200 sand paper and then polish them, or hit 'em gently on a buffing wheel. They'll get smooth as glass. Mineral oil will help too.

The "For Barber's Use" didn't mean they were sold only to barbers. It was a "grade" of razor that was supposed to be a step above the regular line. A bit more snob appeal or something I guess. Either that or they were trying to signify the razor was up to doing commercial weight work. You'll see some every now and then that are marked FOR BARBERS ONLY too.

You got a good one.

The Illinois strop is one I bought years ago and I ruined it for razors by rubbing green compound into it; now it puts scratches the 12,000 grit bevel.

Still good for knives which is why it has the green compound embedded in it anyway.

The new strop is an 'Ace High' Belgian Shell that I got with the razor in question. I've been working it over as it was pretty dried out, but hopefully not dry rotted like the stiching. When I pulled the handle taught, it came off in my hand.

Hand stiched it back on with some heavy thread but still working on the strop. It's a beauty though and I think will come through OK.