A place dedicated to swords, hatchets, throwing knives, oriental cutlery, tomahawk heads and more. Anything you do not consider to be 100% traditional knife is welcome.
Post Reply
16 posts

"There are none so blind as those that refuse to see"

God Bless America - Though I don't know why he would want to.
Top

Nice Fleam. Probably from about that time. Here is another set. 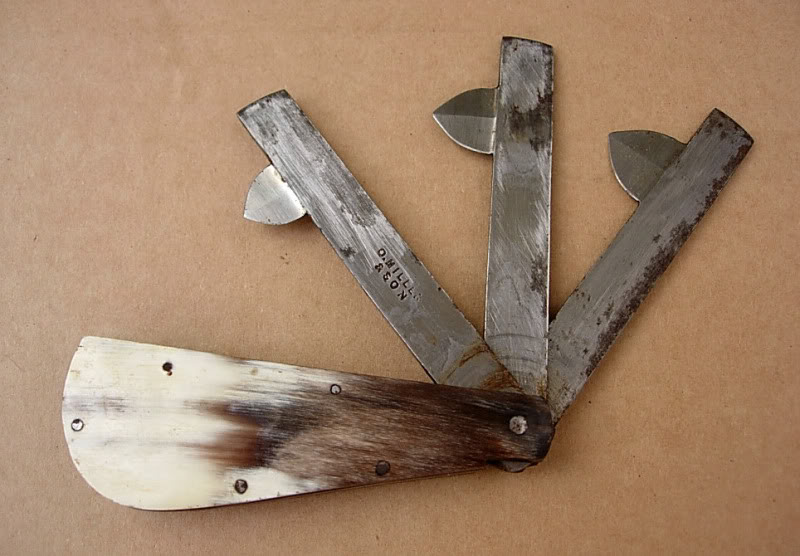 Nice one S-K. They look exactly alike except you have one more blade and still have polish on the blades. Did you happen to see Orvet's comments in Knife Lore - Old and Obscure Brands?
"There are none so blind as those that refuse to see"

God Bless America - Though I don't know why he would want to.
Top

I've never owned a fleam in my life, I thought they were mildly interesting because they were of a cutlery nature.
Most seemed kind of rough. Not these. These are very nicely made as are others in this thread that I just found.
No spring on these. Blades freely but firmly, rotate on a pivot. Polished horn. Brass backcover.

I clicked on this because I didn't know what a fleam was...now I've seen pics, I still don't know what it is
Top

Beautiful old pieces of cutlery but I'm with you SMH, are they carpentry tools or some kind of scribes? Help us out Joe

It's a lancet used primarily by veterinarians for bloodletting. https://en.m.wikipedia.org/wiki/Fleam
Take care and God bless,

But any knife is better than no knife! ~ Mumbleypeg (aka Ken)
Top

And you know they have to be pretty old.

May the Father and Son bless
Lyle
Top

Thanks Lyle, and others who commented.

These are veterinary tools as I understand them. Blood letting. I'm glad we're past that.

I missed you sneak these in here Joe - Nice

- they are in great shape and Borwick made many of them

... I have a similar horn handled fleam but no makers mark though it looks exactly the same as your bigger lighter horn handled fleam (but mine has a few bug bites in the horn) - same exact birds-eye pivot pin too for the blades - and no springs to worry about given they were all friction folders - My fleam was a local score from an estate and was supposedly carried in the Civil War by one of their ancestors who was an officer in the Union army and part of the CT regiment (there were other Civil War items from the same individual) -- Fleams also came in all brass handled models and others were made with a spring action mechanism - don't have one of the latter but essentially you hit a lock which releases a spring-loaded blade which subsequently hits the target (usually some type of infection or boil

... The first time I handled a spring-loaded fleam I almost hit the lock when the seller warned me to be careful - if I had hit it before his warning I would have had first hand experience as to how it worked the hard way

. . Nothing like a little blood letting to relieve your blood pressure

... in those days fly tiers tools were often repurposed items and scissors were usually from their wive's sewing boxes

Thanks Lee.
I was wondering if you were familiar with Borwick. I'm glad you have something like these.

I'm also glad you didn't "fleam" yourself with the spring action one.

These are pretty cool. I'm impressed with them.

Fascinating. Great cutlery skills being used to make tools for bloodletting. There's a lot to learn about these sharp things in general.

Return to “Other Sharp Objects”